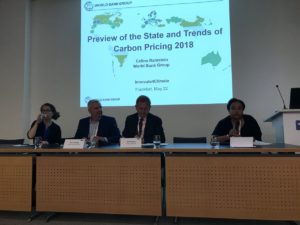 After writing about forests and aviation a few months back, I started looking at other links to forests that we don’t often make.

At a conference held in May to further the latest in carbon markets and green finance, there was a panel on the potential of blockchain technology to modernise greenhouse gas emissions data collection, processing and transaction registries.  Before diving in, let’s back up to the basics.

It’s just a way to store information in a shared and continuously reconciled form, which is why they are sometimes called distributed ledger technologies. The data stored in a blockchain is not held in any single location; instead, the records it keeps are distributed across a large number of typically globally located nodes. This has many advantages, for example guaranteed availability of data and the fact that anyone with access to the blockchain can verify its content.  By storing data across a global network, a blockchain also eliminates the risks that come from storing data centrally, such as localised vulnerability that computer hackers can exploit. Transactions are immutable, meaning that any record that is saved will be there for as long as the blockchain exists, without the possibility of alterations. A transparency dream!

The potential with blockchain and forests

While there are now more than 700 traded cryptocurrencies like Bitcoin that live on blockchains, there are many other applications for immutable and constantly available data storage, which brings us back to protecting forests.

Stopping trees from being cut down is the largest, most immediate and cost-effective action we can take in fighting climate change.  That’s why Ecosphere+ is focused on monetising the carbon stored in the forests we protect – we want to show a financial return as well as environmental and social returns so we can scale forest protection.  Blockchain could help in three main ways: 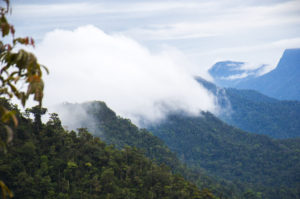 1. Tracking carbon: carbon credits are currently serialised once issued in carbon registries, such as APX and Markit. Those registries then retire the carbon once a buyer purchases the carbon and it’s not necessarily automated. Using blockchain technologies could disrupt and strengthen registries and exchanges by automatically storing and processing the information of one tonne of carbon in the blockchain itself and show one carbon credit’s journey from origination through purchase and retirement.  This blog takes it even further by linking blockchain to artificial intelligence to enhance third-party validation and verification as well as carbon standards, such as those from the Verified Carbon Standard.

2. Trading carbon: Peer-to-peer trade confirmations could become almost instantaneous as opposed to taking days to clear. Potentially, this means intermediaries, like a clearing house, could be removed from the process. Numerous stock and commodities exchanges are prototyping blockchain applications for the services they offer, such as Nasdaq Linq a platform for private market trading. Smart contracts could also be helpful to buy and sell carbon, where computer code goes into the blockchain to facilitate, execute and enforce the negotiation or performance of an agreement automatically. Two attractive aspects of using a cryptocurrency here would be the low transaction cost and the near instant transaction execution.

3. Supply chain auditing: forests get cut down for things like palm oil, beef, lumber and other commodities. Increasingly, companies are addressing these drivers by making products that are deforestation free.  But how can we tell?  Transparency could be introduced with the use of blockchain-based timestamping of a date and location that corresponds to a product number.  Eight major corporations including McDonald’s and L’Oreal have joined the newly-expanded supply chain platform of CDP – the non-profit that drives companies and governments to reduce their greenhouse gas emissions, safeguard water resources and protect forests – to request information from their key suppliers on how they are managing the risks linked to deforestation. The companies say they are combining their purchasing power to achieve deforestation-free commodity supply chains and ensure that the commodities they need will continue to be available in the future.  Insert blockchain! 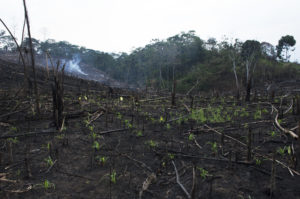 So, when are all these cool things going to happen?

For more on blockchain generally, one of the speakers at Innovate4Climate, Alex Tapscott, wrote a book: Blockchain Revolution: How the Technology Behind Bitcoin Is Changing Money, Business, and the World.  Also check out the work of another speaker, Deanna MacDonald, the CEO & co-founder of Blockchain Labs for Open Collaboration.

Ecosphere+ is a new, mission-driven entity that enables urgently needed climate action by channelling investment into living forests worldwide and creating value for the ecosystem services that support the planet. We are part of the €100 million Althelia Climate Fund (ACF), the largest sustainable land use and forestry carbon portfolio in the world.