Linking Food And Energy To Save Water

This article on food, energy and water originally featured on The Times Raconteur, written by Felicia Jackson on 24th October 2017. Find the original article here. Our CEO, Lisa Walker contributed to this article including the value of forests and micro transactions, examples of our projects and blogs can be found on our website.

The United Nations forecasts that almost half the world’s population will be living in high water stress areas by 2030, while it has become increasingly apparent water management cannot be looked at in isolation as changes in one system affect others.

Lisa Walker, chief executive of Ecosphere+, explains: “Essentially, it’s about competition for natural capital – animals and crops, water to feed them, as well as water for bio or hydro energy, mining, oil and gas production, agriculture and cities. The amount of water on Earth has always remained the same, but increasing population has raised demand for food and energy hugely, and both are thirsty.”

A case in point is food consumption. Land, water, and energy are needed to produce food and, as food requirements increase, so does demand for these factors. Food production doesn’t merely stress its immediate environment; globally traded food is packaged, shipped, flown and delivered to the consumer, and these hidden environmental costs must be factored in to the choices we make as producers and consumers.

Globally, the role of rainforests cannot be forgotten as they are responsible for 65 per cent of rainfall. The Amazon evaporates eight trillion tonnes of water vapour into the atmosphere each year. This “water pump” sustains $1 billion to $3 billion a year in rain-fed agriculture. It also flows south on a jet stream and feeds one of the world’s biggest breadbaskets, the La Plata Basin of Brazil and Argentina, with rain, while some even reaches the United States and Europe. Hydropower provides 70 per cent of Brazil’s energy, sourced from the Amazon’s rivers. High rates of deforestation are disrupting this flow. 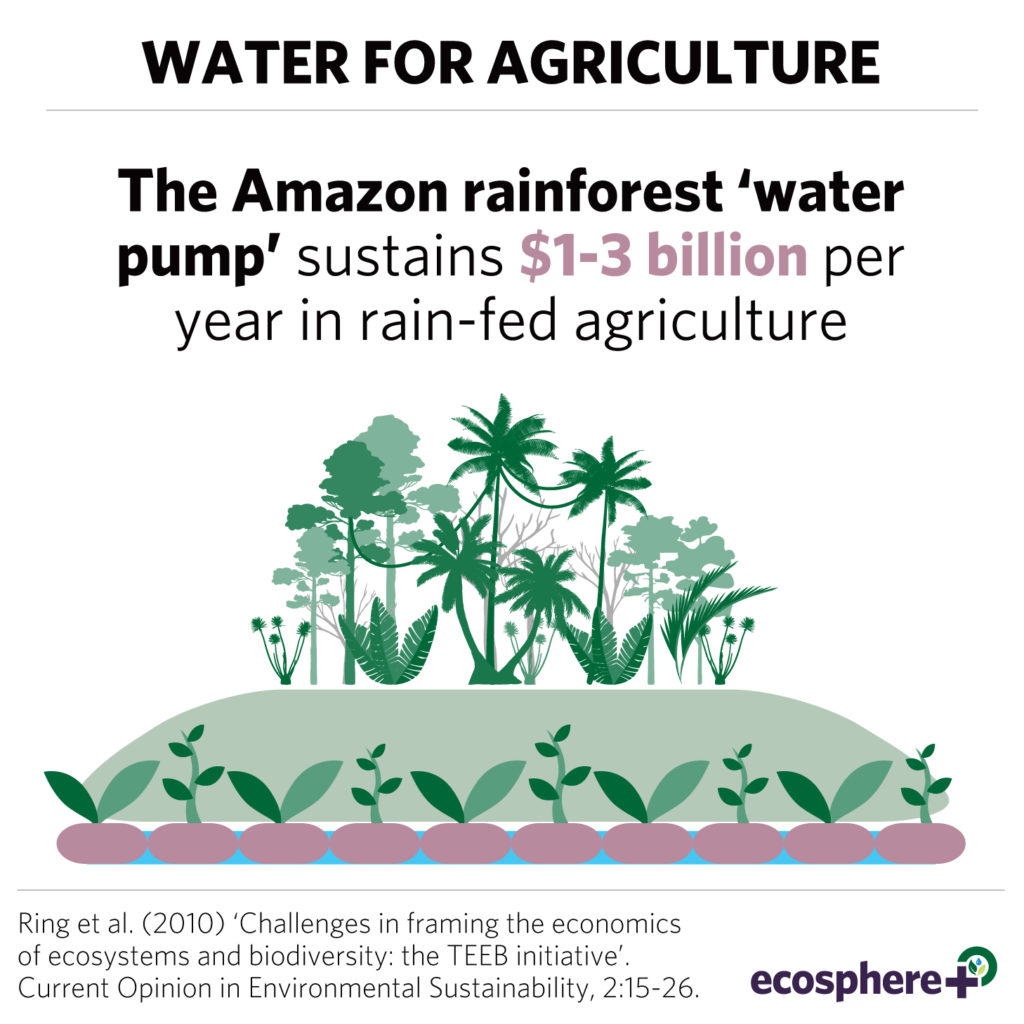 An E+ infographic representing the significance of water for agriculture

As Rabi Mohtar, of the World Water Council’s board of governors, says: “The land, water and energy footprint, as well as air, water and soil qualities, are issues that must be quantified and carefully managed to have a food system that is sustainable over time.” He warns: “Due to the inherent interconnections between them, a risk to one of these resources will impact the others.” 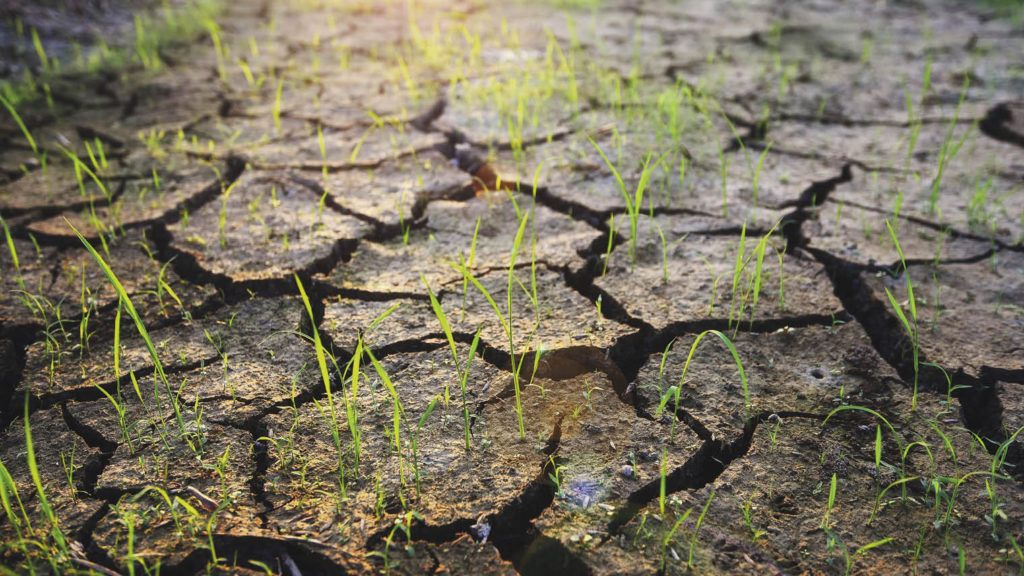 Rates of desertification and drought have skyrocketed

Agriculture already consumes two-thirds of the world’s freshwater resources, while one quarter of global energy use is within food production and supply. Hydropower alone is the biggest supplier of renewable energy and provided more than 16 per cent of the world’s electricity in 2016. Rates of desertification and drought have skyrocketed to the tune of 12 million hectares of arable land annually.

Action is being taken. Large organisations are looking at vertical integration in the supply chain in a number of different ways, from the implementation of new processes to new technologies. Unilever, for example, is encouraging intercropping for its tea farmers, maximising the use of land and providing diversification for farmers. Smart agriculture is becoming a major buzzword and the widespread implementation is laying groundwork for entirely new approaches.

“Addressing losses in water, energy and food is the first step towards their effective management”

Mohsen Mohseninia, vice president of market development in Europe at Aeris, says: “Sensors can help collect data about the entire ecosystem in real time, while helping companies offset the environmental footprint of our food. The possibilities that such technologies offer are endless. Data can be captured on anything from the changing amounts of rainfall, to the amount of petrol used transporting goods, to the condition of livestock or crops. This real-time data can be used to better understand how this nexus operates and more importantly understand the impact of people’s decisions.”

There is no doubt that actions are being taken, ranging from increasing support, to fighting deforestation, to changing management of commodity supply chains. The Paris Agreement on climate change includes the REDD+ mechanism to help reduce deforestation and degradation, development of carbon pricing at the “micro-transaction” which can be scaled up into large sums, and the development of new processes and technologies; these will all provide part of the solution to the challenge.

However, as Dr Feja Lesniewska, from the School of Law at SOAS, says: “All positive incentives could be cancelled out by climate change response measures that are not in harmony with WEF [water-energy-food] systems thinking. For instance, expanding monocultural plantations for bioenergy crops could reduce the availability of land suitable for agricultural purposes, especially in developing countries, as well as place further stresses on fresh water. Although interventions may be geographically specific, they can often have transnational ramifications that threaten other regional ecosystems WEF resilience.”

Managing waste is one of the most important ways in which we can address these systemic challenges. In the UK, we throw away around half our food, import more than half our water in goods and energy efficiency is relatively low throughout the economy. Addressing losses in water, energy and food is the first step towards their effective management, while more education about the interconnectedness of these systems should help drive action. 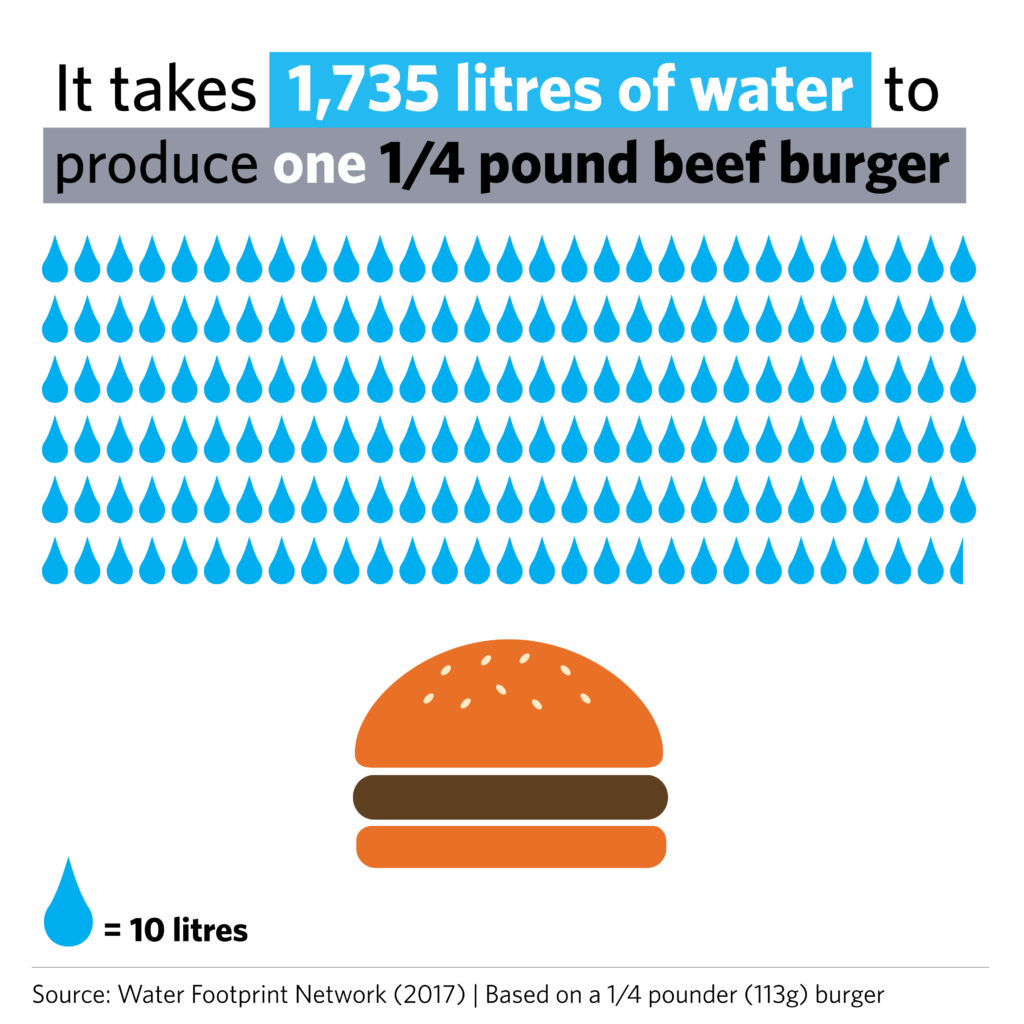 An E+ infographic exemplifying the link between food and water

Gary Davis, president of Ecometrica, points out: “We can drive change through behaviour. Consumers can change their habits quickly and companies take notice of that. Companies get a competitive edge [by greening their supply chain], but it’s always important for governments to come in behind, reinforce actions and put in place a regulatory framework.”

Mr Mohtar concludes: “Enabling policy coherence must be a priority for addressing and resolving nexus issues. This involves adjusting current practices – business as usual – to allow better communication and co-ordination across agencies that manage water-energy-food resources. Policies for any one of the WEF sectors must also consider its impact upon other sectors.”