BONN, 9 November – IETA and the Climate Markets & Investment Association (CMIA) are proud to announce the first Carbon Pricing Champion Award at COP23 to the government of New Zealand.

The two groups awarded the honour to New Zealand in recognition of its ETS review outcomes, which will bolster the market’s environmental integrity and allow it to be more adaptable to changing circumstances. The reforms, which include five-year rolling supply decisions and a move to auctions, provide clarity and certainty over the future direction of the domestic market, which is now in its tenth year. The changes will also increase the New Zealand system’s harmonisation with other markets, leaving it well-positioned for potential linkages that offer the potential to improve efficiencies and lower costs for participants over time.

New Zealand is recognised for its leadership on carbon markets the international arena as well. At COP21 in Paris, it launched the Ministerial Declaration on Carbon Markets, which has grown in signatories. The group highlights the important role that international market mechanisms will play in enhancing mitigation ambition under the Paris Agreement. This year, the group continued its cooperation in considering standards and guidelines for the environmental integrity of international market mechanisms.

“The improvements that the New Zealand government is making to the ETS are yet another example of the leadership the country has shown on carbon pricing over many years, and make it a very worthy recipient of the first Carbon Pricing Champion Award at COP23,” says Dirk Forrister, President and CEO of IETA. “New Zealand’s market has operated for 10 years, and the changes will strengthen the market and enhance its flexibility and adaptability. Policy certainty and clarity are vital for businesses, which are making long-term investment decisions now.”

“New Zealand has been notably consistent in putting carbon pricing at the heart of its low-carbon development plan and NDC,” says Adrian Rimmer, CMIA President. “This award recognises that the new government is not only ensuring clarity for investors by maintaining support for its current market-based policies, but also by showing global leadership through increasing its ambition – such as its plan to shift to 100% renewables by 2035.”

The award was presented this evening to Kay Harrison, lead negotiator for New Zealand, at the IETA Business Hub. 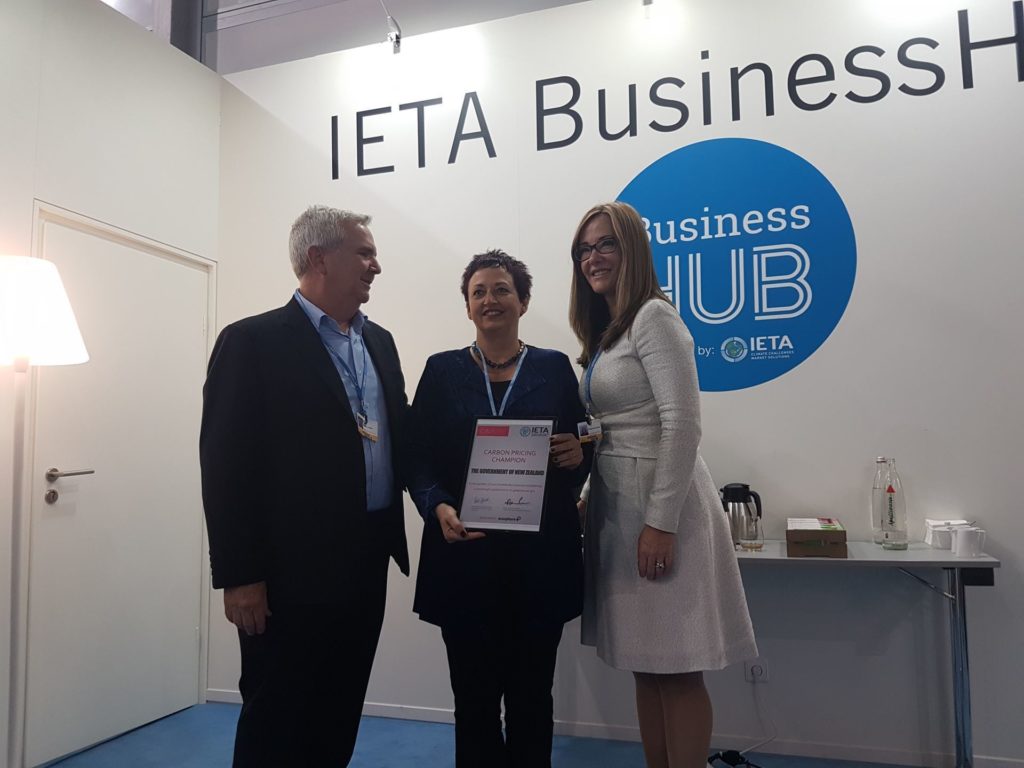 IETA and CMIA would like to thank Ecosphere+ and its CEO Lisa Walker for their continued support of the award. Ecosphere+ is a new venture founded by the Althelia Climate Fund to build markets that put a value on standing forests, incentivise sustainable business models and responsible supply chains.

About IETA:
IETA is the voice of business on carbon markets around the world. Established in 1999, IETA’s members include global leaders in the oil, electricity, cement, aluminium, chemical, technology, data verification, broking, trading, legal, finance, and consulting industries.

CMIA leads a global coalition of private sector actors since 2008. Our diverse membership is comprised of companies and organisations involved in shifting the trillions that will enable a transition to a low-carbon global economy through climate policy, finance and investment.