A solution to overcome double-counting in carbon markets

Double-counting has been a thorny issue in the world of carbon markets since their inception, and in particular since organisations started making claims about their emissions being voluntarily offset with carbon credits.

The problem with counting the same claim twice

The main risk of double claiming emissions reductions from carbon credit projects in developing countries has historically revolved around the risk of the same credit being sold more than once. Through voluntary certification standards like Verra and linked public registries such as APX and Markit, this risk has been significantly reduced, and by ensuring credits you buy are registered and retired, it’s possible to guarantee they have not been bought before.

However, more recently a new risk has emerged. Since the Paris Agreement in 2015, developing country governments worked on their own emissions reductions targets in the form of Nationally Determined Contributions (NDCs). As governments report against these national targets, there is a risk that carbon credits claimed at the project level could be claimed again as national emission reductions, and would not represent an additional emissions reduction.

For example, an offset project developer could sell credits to an international buyer in order that they can claim that their emissions have been reduced or they are carbon neutral. However, those credits may already be counted as reductions

in the host country’s commitment meaning either the product isn’t carbon neutral or the country’s emissions are, in effect, higher than reported. Obviously, counting the same emission reductions twice distorts our view of progress being made towards a safe climate. This has also been a concern where governments are regulating action, such as the upcoming Carbon Offset Reduction Scheme for International Aviation (CORSIA) or other compliance markets resulting from Article 6 in the Paris Agreement (ITMOs). One of the criteria for carbon credits to be eligible to use in CORSIA is in fact proof that the credit hasn’t been double counted.  Details on how this will be assessed is still under discussion, with a decision anticipated by the end of 2018.

Eliminating the risk of double claiming is something the REDD+ community have been working towards for some time, with a lot of progress made compared to other project types. The national approach to REDD+ adopted under the UNFCCC does not mean that project scale activities will be phased out, very much the opposite, in order to achieve the ambitious objectives set we will need many more appropriately sized on-the-ground efforts to complement the governance and fiscal policies being enacted at state and national level. Linking these project-scale emissions reductions to national accounting and allowing efforts to be recognised will also provide further certainty which will help unlock much-needed private sector financing & carbon pricing to keep the world’s forests standing.

Progressing to a solution that avoids double counting

According to the World Bank, greater international cooperation through carbon tradingcould reduce the cost of climate change mitigation 32% by 2030. In a world where all countries have national targets to report against, we need to develop solutions to the risk of double-claiming to fully realise this potential, for governments and the private-sector to fully participate.  For this, two sets of actors are required, technicians and policy makers.

We need technicians to devise carbon accounting methodologies that can scale from national to project level accounting. This is not as difficult as it may sound and the methodologies for doing thishave been available for some time – they just need to be implemented. 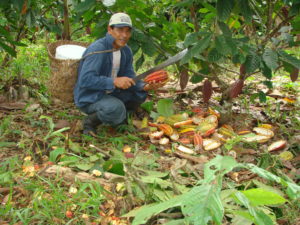 The challenge comes in getting policy makers to work with the stakeholders involved in on-the-ground activities to define the role of these projects when it comes to external finance and the potential for some form of emissions trading of carbon credits. Options to resolve double claims range from individual project developers negotiating with host governments to carbon certification bodiescoming up with double counting guidelines to top-down rules being set by international institutions such as UNFCCC and the International Civil Aviation Organization.

Our NGO partners in Peru, CIMA and AIDER, have worked closely with the Peruvian government through the Peruvian National Service for Protected Areas (SERNANP) to align the emissions reductions generated by the Tambopata-Bahuaja and Cordillera Azul projects with Peru’s national forest emission reference level. This marks a global first as no country yet has commenced the process to officially integrate forest carbon credits into their national REDD+ system.  To achieve this, carbon credits generated at a local level by the Tambopata-Bahuaja and Cordillera Azul projects between 2015 and 2018 and sold outside of the country by 2020 will be deducted from the Peruvian national inventory, avoiding any potential double-counting. For the post-2018 emissions reductions the country will work with projects to achieve technical alignment of accounting mechanisms (i.e. full nesting). Among other key issues, this will most likely involve a risk based approach to allocating regional reference levels to specific project areas and then developing a partnership to monitor achievements on the ground. The agreements on the share of sales proceeds are already in place as part of the administration contracts for protected areas in place with CIMA and AIDER.

There are some fundamentals our partners went through that could be helpful as part of this type of solution in any country:

We applaud the Peruvian Government through SERNANP and the Ministry of Environment and their NGO partners for their progress on corresponding adjustments between on-going initiatives in protected areas and the national policies on REDD+. We  look forward to seeing other countries follow suit and seek to clarify how emissions reductions achieved through specific projects or programs on the ground can be integrated into national accounting with credit attributed transparently in accordance with NDCs, accelerating the path towards a Paris Agreement fully operational for the forest and its people.

Forest control and surveillance in the Peruvian Amazon
May 15, 2021