On a research survey in Nepal, I once stared into the eyes of a wild tiger, whilst dangling from the trunk of an elephant. The great beast had gone into sharp reverse, catapulting me from my observation post on its neck, as the tiger leapt from under a bush and charged. Laura saved my life, by rapidly stretching out to seize my trouser belt. Few wives can move at the speed of a rattlesnake. It was all a little too close for comfort.

And that’s our usual default. We’ve become accustomed to being a little more comfortable with de-wilding, rather than re-wilding. Nature on a TV screen, accompanied by Sir David’s reassuring drone is much less frightening to face, than nature in the raw. Reality TV has in essence become our reality.

For me, de-wilding gloom reached its zenith with last year’s scientific publication of the ‘Second Warning to Humanity’, to which I was a signatory. Of nine critical measures of global environmental health monitored since the first warning 25 years ago, only one has improved – the hole in the ozone layer. We are all witnessing nature’s car crash in slow motion. So how can we put it into reverse?

The answer is simple. Ecosphere+. 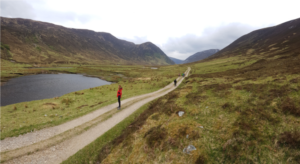 First, let’s look at some de-wilding facts. There are 391,000 species of plants on earth, one in five of which are threatened with extinction. Of 7,000 edible plants, we mainly eat just 30, and industrial agriculture has channelled 60% our global dependency down to just four (rice, wheat, maize and potato).  In India alone, there are 1,000 varieties of mango but you won’t see many of them in any supermarket because efficiencies require supply chain simplification, in favour of mono-culture propped up by fertilizer and agrochemicals.

In the ‘80s, scientifically exploring the rainforest canopy in Ecuador’s rainforests, I found 40% of all life on earth lived up there. New species were the norm. In Germany over the last 27 years, the quantum of mid-summer flying insect biomass has declined by 82%. That’s why if you are driving fast down the autobahn in a Porsche GT RS, you do not need to scrape their bodies off the windscreen. Globally the figure is near 58%.

And mammals? As a budding young zoologist in Tsavo East National Park in 1975 I used to be charged by black rhino, regularly. There were estimated to be 16,000 in the park. Last time I could bear to look, there were just 67 and only five lived wild. Of 5,416 mammal species, 75 of which have recently vanished forever, one in four are now at risk of extinction.

How are we doing on soil? In October 2017, the UK’s Environment Minister, Michael Gove, declared that Britain was 30-40 years away from “the fundamental eradication of soil fertility”. A typical gram of healthy European soil will have 5000 species of microbes in it. These maintain fertility, reduce green house gas emissions, and combat pests. Intensive agriculture in Europe has reduced soil nitrogen uptake and soil aggregates by 50%. Soil mixing by earthworms is reduced by 95%.

So, is global ‘re-wilding’ an answer? Yes. It’s imperative.  Through encouraging nature to take care of itself, rather than boosting it with agri-steroids to feed the world on the cheap, we are all able to help reverse the damage that has been done to our planet. But how can it be easy when all we hear about is the doom and gloom? Ecosphere+ has a number of projectsthat are protecting the planet’s critical ecosystems, and companies and individuals can easily integrate these solutions into the way they operate, by purchasing carbon credits that fund these projects.

Paul Lister is a philanthropist with a vision to re-wild Scotland. He bought 22,000 acres of upland, now re-named Alladale Wilderness Reserve, and planted over 700,000 Scots Pines. Once Scotland was covered in them. He offered a bold experiment – to fence Alladale and bring back wolves and bears. From the reaction you would think he was promoting Jurassic Park!

Walking with Paul through the utterly beautiful valleys of Alladale this Spring, we explored the view that a collective fear of nature as it was, has descended on our increasingly urbanite world. Scotland’s landscape once filled with pine forests and a rich fauna, from Lynx to Elk, is now replaced with a baronial barrenness, that we have come to regard as ‘normal’. Yet nature restored and raw, could make more money than stalking or grouse and re-connect ‘the many’ to the spirit of wilderness, rather than just a ‘the few’.

Surprisingly Paul has found his vision antagonises both rich and poor alike. Estate owners fear the idea might catch on, removing land from their control and walkers fear their “right to roam” will be thwarted by fences keeping wild animals in and them out. Yet evidence elsewhere shows that well managed re-wilding works for all. Consider Yellowstone where the re-introduction of wolves has led to a boom in game tourism revenues, now four times higher than Elk hunting and the natural culling of deer, saved money too.

Beyond philanthropists, even investors are turning to nature to explore market-driven conservation solutions, such as those turning to ‘impact investing. This market is still small, at US$115 in 2017, but it is rapidly growing.  Althelia-Mirova, the parent of Ecosphere+,  is an example of an impact investment fund manager dedicated to curbing rainforest loss and delivering a more resilient and economically stable life to poor farmers. The projects funded generate sustainable commodities such as coffee or cocoa and also carbon credits, by halting deforestation and so curbing smoke from trees that would have been otherwise cleared and burned for farming.

And that’s how you can engage in re-wilding – from a distance, by purchasing carbon credits from Ecosphere+ to make your business carbon neutral or to go further, and become climate positive. Ecosphere+ has found innovative ways to bring re-wilding to the high street by linking carbon credits to Ben & Jerry’s ice creamin their store. Part of the proceeds from these Ecosphere+ credits goes all the way back to those farmers, who use the funds to farm differently, by not cutting forests and helping to restore and re-wild agriculture.

We look forward to joining in with the Intelligence Squared Re-wilding debate on 10thJuly in London https://www.intelligencesquared.com/events/the-battle-for-the-countryside-britain-should-rewild-its-uplands/