As part of his master’s thesis, Jack Robinson interviewed Ecosphere+’s VP of Business Development & Strategy, Jessica Verhagen, to understand more about how the new technology could be used to protect the world’s threatened forests.

Blockchain is the new tech on everybody’s lips. Prophetic claims have been made about the technological potential for almost every industry. The World Economic Forum has predicted that ten percent of GDP will be stored on the blockchain by 2025, and Chapron’s Nature paper last year set out a number of reasons ‘why the world needs cryptogovernance’. Having studied climate change for two years at the University of Copenhagen for my Master’s degree, I have become acutely aware of both the scale of the climate challenge and the pressing need for an interdisciplinary and unorthodox approach to mitigation. By looking into REDD+ and blockchain I hoped to pair knowledge of two fields that are rarely considered together, and get people talking from two very different areas.

In order to understand if blockchain could be used as a tool to improve REDD+ and forestry conservation, I spoke to a number of people with in-depth knowledge of both topics, including Jessica. We talked firstly about Jessica’s time working with Ecosphere+ and the pilot project with Ben & Jerry’s using Poseidon’s blockchain-based technology platform to connect consumers with carbon sequestration projects at the point-of-sale.

In this application, Poseidon uses blockchain and cryptocurrency to offset carbon associated with products, so that when something, (ice cream for example) is purchased, part of the transaction cost is automatically used to buy cryptocurrency, which is then paid directly to Ecosphere+ REDD+ projects, and the customer can see which projects they have helped to fund, using the traceability properties of the blockchain technology. The aim is to highlight the invisible cost of carbon in many products, and offset that carbon footprint using forestry conservation. It could be the start of a voluntary carbon market for REDD+ that has so far proved elusive.

I wanted to understand some of the problems that my interviewees had experienced from directly working on REDD+ projects. Jessica talked about her work with the world’s largest grouped REDD+ project that involved over 100 different communities and indigenous groups in Guatemala, and described the complexity associated with land rights and cooperation on that scale to protect an incredibly biodiverse and important area of forest. Through other conversations I was able to produce this ‘conceptual pairing analysis’ which linked some of the fundamental properties of blockchain to some of the challenges that people have experienced with REDD+. 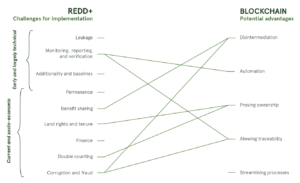 Having come from a natural sciences background myself with no experience of blockchain technology, I spent the first few months of my thesis getting up to speed with understanding the technology, and getting past the buzz words that populate most of the short articles on blockchain. My advice on this is that if you really want to understand how blockchain works and what it can (and can’t) be used for, read Daniel Drescher’s ‘Blockchain Basics’ – it’s a very well written and clear introduction to the technology, and if any of the blockchain prophecies come true, a few hours reading now seems like a good investment. Without going into details here, blockchain is a ledger, or record of transactions that is digital, secure, and most importantly distributed and decentralised, meaning that no one person controls it or the access to it.

Having talked with Jessica and the other interviewees about the challenges they had experienced with REDD+, I also asked questions about what potentials and challenges they saw for blockchain technology in the future. I brought these discussions together to suggest a number of ways that blockchain could be used, either within the existing REDD+ system, or as a tool to create a new type of forest conservation scheme that aims to achieve the same results as REDD+ but through a different approach, and in combination with a number of other new technologies. These four models can be seen in the graph below. 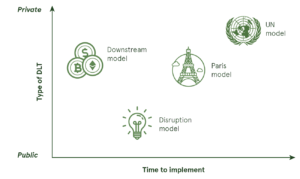 Ecosphere+ and Poseidon are exploring the potential of the Downstream model, where the carbon credits ‘downstream’ of the REDD+ projects are marketed using the potential of blockchain, and cryptocurrency is used to connect consumers better to carbon sequestration projects. In the future there is potential to go one step further and connect individual consumers more directly with land owners and communities that are protecting some of the world’s most important forests. This moves towards the Disruption model, which could utilise other new technologies such as internet of things monitoring devices, and high-resolution satellite imagery for forest monitoring, reporting, and verification of REDD+ projects.

One of the most important findings of my research though, was that as with any new technology, using blockchain for REDD+ could create a whole host of new challenges and problems, so any experimentation, especially when vulnerable communities are involved, should be carefully considered and not hastily implemented, because while the blockchain hype may last a few years, the lifetime of trees and forest communities are far greater. Blockchain enthusiasts are quick to suggest some advantages of distributed and decentralised systems, but every coin has two sides. On one side you have transparency, immutability, and disintermediation, but on the other side you have surveillance, elite capture, and reintermediation. Keeping the coin the right side up will be the challenge.

You can read the full thesis here or a shorter article (6 minute read) explaining some more of the findings here.

Jack has recently finished his Master’s degree in climate change at the University of Copenhagen and works for sustainability consultancy Sustainia in the Danish capital, writing about some of the most innovative organisations working with the Sustainable Development Goals and advising companies how to integrate sustainability into the core of their business. Having studied natural sciences at the University of Cambridge in the UK, Jack has published climate change articles with Berlin-based magazine The Beam and Cleantechnica, and is currently exploring further opportunities to use blockchain to protect forests with Gaiachain, a technology startup using blockchain to help companies dedicated to responsible sourcing reap the market benefits they deserve.