Far into the Peruvian Amazon, in the forested mountains near the Cordillera Azul National Park, lives Iyani. Iyani is Lieutenant Governor of Caserio de Maronilla, one of the many communities in the margins of the park working to transition to sustainable livelihoods that improve community life and protect the natural environment. Iyani is a busy woman – not only is she a community leader, she is also a mother.

And Iyani has seen a lot. In the year’s since Caserio de Maronilla began being supported by CIMA, the Cordillera Azul National Park project’s implementing partner on the ground, Iyani has been a part of a fundamental transformation in the community. Iyani likes to say that the biggest change is the mentality – a mentality of environmental conservation and respect for community. But it’s not just this. Iyani and her community lived through years of conflict in the Huánuco region of the Cordillera Azul National Park before working with CIMA. Tensions between villages and communities had made times rough. Since then, as communities from the coast and the mountains have come to live together harmoniously in the park, Iyani describes a community that is regenerated, living to conserve its natural resources rather than destroy them. “There is life here, there always was,” she says. 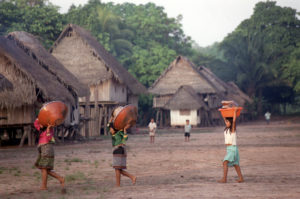 Crucially, CIMA has supported Iyani’s community in the production of cacao. For the past five years, Caserio de Maronilla has been harvesting and selling cacao as part of the Naranjillo Cooperative. Workshops and other assistance programmes by CIMA have supported the community in growing their sustainable cacao business and expanding to produce other crops like bananas and rice. CIMA has set ‘principles of coexistence’ to guide communities of the Cordillera Azul National Park in how to work and live together. Iyani says that this guidance was crucial to her and her community, specifically in terms of setting up a means of community management and learning to coexist with their neighbours and the environment.

Now, Iyani is looking ahead to what lies in store for Caserio de Maronilla. She’s eager to speak of what has been accomplished as a community and how others can live and work under the principles that guide her. But most importantly, she says, is continuing to build a place for the next generation that is sustainable and resilient. Because of course, Iyani is a mother, and like other parents in Cordillera Azul, she wants what’s best for her children.

Read more about the work of the Cordillera Azul National Park here.