How fast can you say it? It’s certainly a mouthful, and chances are, you haven’t heard of a Storm’s Stork anyways. Why? Well, there are only 500 estimated remaining in the wild across Southeast Asia. Deforestation from logging and the development of palm oil plantations have decimated hundreds of thousands of hectares of unique lowland habitat for this majestic stork. In South Sumatra alone, where the Sumatra Merang Peatland Project is located, approximately two thirds of all swamp forests were logged from 1982 to 1997. These increasing threats are making it harder than ever for the Storm’s Stork to establish a secure population.

The Sumatra Merang Peatland Project (SMPP) in Indonesia is restoring more than 22,900 hectares of peatland rainforest in the Merang biodiversity zone. Carbon offset revenue from Ecosphere+ clients support project operations to rehabilitate and protect this critical ecosystem, creating a conservation area for hundreds of unique and endangered species. The project is creating a widened lowland forest corridor and a secure refuge for the Storm’s Storks across the wider landscape.

Sightings are uncommon due to ongoing threats, but SMPP staff found an injured Storm’s Stork after a broken leg brought the bird close to base camp looking for food. While staff rushed to splint the leg and rehabilitate the animal, community members took the rare opportunity to see this incredible bird up close. Distinguished by yellowish-orange facial skin patches around the eyes, Storm’s Storks stand at 75-91 cm tall and have red legs and pinkish-red bills. Onlookers observed its powerful wings and long bill as it snacked on locally caught fish.

After treatment and special care, project staff released the Storm’s Stork back into a remote corner of the project area, thrilled to have witnessed the appearance this unique endangered species. The biodiversity team at the project has confirmed a number of instances where rare, threatened and endangered species are increasingly finding a safe habitat in restored areas across the SMPP project zone. We hope to hear about more sightings soon, and we’ll keep you updated when one makes another visit! 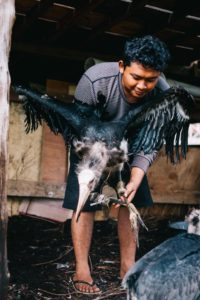