Resilience in the eye of the storm

2020 was a record-breaking year in more ways than one. For Central America, 2020 was a year of extreme challenges. Not only did the COVID-19 pandemic throw the region into economic crisis, Central America also felt the devastating effects of the most active Atlantic Hurricane season on record. Within just one month, Hurricane Eta and Iota had ravaged swathes of Panama, Guatemala, Costa Rica, Honduras, Nicaragua, El Salvador and Belize. It is estimated that 5.2 million people have been affected by hurricanes Eta and Iota, people already reeling from the widespread effects of COVID-19.

Our project on the Guatemalan Conservation Coast managed to weather the storm thanks to strong and steadfast direction from the project implementing partner, FUNDAECO. The project area, which spans the entire Caribbean coastline of Guatemala, bordering Belize to the north and Honduras to the south, was predominately affected on its southern border and east coast. Communities here suffered, as cardamom, vanilla, maize and black pepper plantations were damaged or destroyed by high winds, excess of humidity, flooding and landslides. The storm also severely damaged roads within the project area, especially those that form part of the project’s ecotourism activities.

However, despite these hits, the hurricanes showed yet again the critical value of forests, which are a vital natural infrastructure to reduce vulnerability to the impacts of climate change. Throughout the project region, the areas that took the most beating were those that had previously been deforested back in the 70s and 80s, such as parts of the lowlands and mountain areas. Deforested slopes stripped of vegetation have no barrier to prevent and slow dangerous mudslides caused by extreme weather events and so these deforested areas, and the communities that live here, are at a greater risk. By protecting forests, the communities involved in the Conservation Coast project are ensuring greater resilience in the region, which allowed most communities to escape from Eta and Iota without experiencing devastating damage. 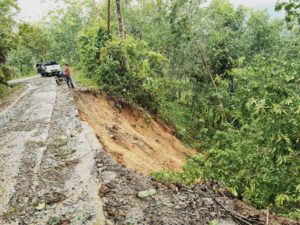 In the aftermath of the storm, FUNDAECO, the Guatemalan NGO which uses climate finance to implement project activities on the ground, was swift and targeted in its response. FUNDAECO led food aid distributions into communities in the project region, bringing much needed support to those battered by the storms. A few months later, FUNDAECO is ploughing ahead to develop a strategy for even greater resilience to what will undoubtedly be more frequent and violent extreme weather events brought on by climate change.

Firstly, the ability of some crops to withstand the storms showed the importance of identifying cash crops that will be resilient to a changing climate. After losing almost 90% of its black pepper crops and suffering damages to cardamom, vanilla and maize after Eta and Iota, FUNDAECO plans to work with local farmers in the region to support the transition to more weather resistant crops that are able to cope with both droughts and floods. Cinnamon is one such crop, which grows as a bush and is able to withstand extreme weather, while cardamom agroforestry is another alternative, where cardamom is grown alongside and in the shade of strong rubber trees. In addition to working to improve the resilience of local commodities, FUNDAECO is also looking closely at expanding its remote surveillance capabilities. Targeted use of forest protection technology, satellite imagery and drone footage will help FUNDAECO to increase effectiveness in the fight against deforestation. In the medium term, these technologies could also be used to identify project areas that are vulnerable to the affects of climate change and to monitor how a changing climate is affecting the landscape.

So, despite the storm of challenges that came with 2020, the Guatemalan Conservation Coast project remains strong. The project is empowered with a resilience and adaptability that comes from the unique partnerships that tie the region together. As the largest grouped forest-based carbon project in the world, the Guatemalan Conservation Coast project is fortified by the hundreds of communities, government, NGO and private partners that have come together to protect this incredible landscape and empower those that live here. There are many challenges on the horizon, but here on the Conservation Coast, challenge is breeding opportunity and creativity, and paving a new path forward.

The Guatemalan Conservation Coast project, implemented by FUNDAECO, is a REDD+ project funded by climate finance from Ecosphere+ clients. If you would like to build this project into your net zero or climate strategy, please get in touch.