The story of deforestation in Guatemala

The story of deforestation in Guatemala is a complicated one, and as with deforestation generally, the causes lie in intricate systems of inequality, poverty and globalisation. Guatemala has seen some of the highest rates of deforestation in the Americas, caused predominantly by the conversion of forests into cropland and cattle pastures. From 2001 to 2019, Guatemala lost 1.48Mha of tree cover, equivalent to a 19% decrease in tree cover since 2000. In the Izabal region of Guatemala, which spans the country’s entire Caribbean coastline, deforestation rates have been found to be at 3.41% from the year 2001 to 2010.

Historically, economic drivers are understood to be the leading causes of deforestation across the globe – around 80% of causes in fact. At the turn of the century, the expansion of commodity agriculture boosted rates of deforestation globally, which saw heavy investment in Guatemala’s palm oil and rubber plantations and cattle ranching. Today, increased deforestation and forest degradation in Guatemala have coincided with the expansion of industrial agriculture and the subsequent movement of displaced subsistence farmers deeper into forested areas.

Much work has been done in the Izabal region to greater understand the institutional causes of deforestation. Engagement with landowners, labourers and various stakeholders has revealed that local attitudes towards the drivers of deforestation focus predominantly on a lack of economic and employment opportunities, a lack of laws, enforcement and capacity and intricate systems of land tenure.  A 2015 study on the drivers of deforestation in the Sarstun Motagua Region, which makes up part of the Caribbean coastline area of Guatemala, highlighted the lack of economic and employment opportunities as the strongest factor for deforestation in the area.

It’s no wonder – this part of Guatemala sees some of the worst rates of poverty in the country. A report in 2011 indicated that there is also a correlation between ethnicity and poverty in this region. Livingston, the municipality with a 90.1% poverty rate, is also the municipality with the highest indigenous population, at 52.4%, while Morales and Puerto Barrios, municipalities with lower indigenous populations, have poverty rates a half and a third lower.

Indigenous communities within the region, predominately the q’eqchi, earn far less than their non-indigenous counterparts, the mestizos. A 2015 social assessment showed that 92% of q’eqchi’ interviewed had incomes less than $192 per month, compared to only 58.5% of Mestizos. Furthermore, 18.1% of mestizos had incomes that exceeded $385 per month, while only 2.2% of q’eqchi’ could say the same. Other social indicators, such as housing materials, living conditions and access to basic services, show the inequity – 92% of mestizo homes in the region have access to electricity, compared to only 73% of q’eqchi’. There are powerful systemic inequalities that indigenous people face here on the Guatemalan Caribbean coast which must be overcome. 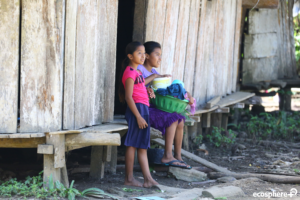 There is also clear evidence of gender inequality on the Guatemalan Caribbean coast, especially in relation to access to education, job opportunities and income. And in terms of childhood education, the region presents one of Guatemala’s higher non-attendance rates for elementary and high school and one of the lowest rates of university enrollment – 87% of the population between the ages of 19 and 24 are not enrolled.

Communities plagued by poverty and a lack of economic opportunities often have little alternative than to exploit the natural environment in order to get by. It’s a vicious cycle: as deforestation and forest degradation increases, communities who depend on the forest’s natural goods and services must seek alternative livelihoods, such as cattle ranching, which even further degrades the landscape. The migration of subsistence farmers and cattle ranchers into forested areas is a historical trend observed in the Izabal region, as the expansion of industrial agriculture has pushed communities further into the forest. The expansion of these commodities – primarily coffee, rubber and palm oil – therefore indirectly drives deforestation here in this coastal region of Guatemala.

The most threatened ecosystems in Izabal are undoubtedly those at lower elevational levels. Lowland terra firme forests in the region have suffered high deforestation rates due to the advance of the agricultural frontier, associated mainly with cattle ranching activities. Much of this forest is also degraded from timber and firewood extraction. Mangrove forests and associated coastal areas are rare ecosystems here, constituting less than 5% of total forest cover, and are also highly threatened, mainly from beach housing developments, firewood extraction and low-scale coal production.

The project on the Guatemalan Caribbean Coast serves to tackle the root drivers of deforestation in the Izabal region by building a resilient, sustainable economy, and addressing the area’s systemic inequalities. The Guatemalan Conservation Coast project, a REDD+ project implemented on the ground by Guatemalan NGO FUNDAECO, is the world’s largest grouped forest-based carbon project bringing together more than 1000 diverse landowners, including municipal, NGO, private and community to protect 675 parcels of forest making up nearly 60,000 hectares of highly threatened forest. The project reduces emissions by preventing deforestation caused by the conversion of forests into cropland and pasture. 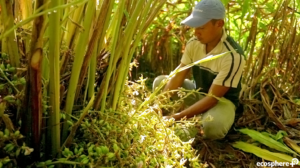 One of the project’s overarching objectives is to address the economic drivers of deforestation by supporting alternative livelihoods for the indigenous communities within the project area. Specifically, the project is:

The Guatemalan Conservation Coast project, led by FUNDAECO, is a critical player in the Izabal region. By bringing together such a large and diverse group of landowners to protect vital forests at real risk of deforestation, the project has developed wide-ranging, cross-economy and cross-cultural support for key project activities. It’s building an economy and society based on a new model of growth; one underpinned by conservation values and equality. By uncovering and targeting the key drivers of deforestation in Izabal, the Conservation Coast project realises consistent benefits for both the environment and the communities that call this place home.

To find out more about this project, and how you can be a part of this critical work, contact us today and see here for project information.