Co-authored by Lisa Walker, CEO at Ecosphere+, and Andrew Mitchell, Founder and CEO at Equilibrium Futures

The voluntary carbon credit market is heavily discounting older vintages. This may make no environmental sense, and in fact, like fine wine, in some cases perhaps these ‘vintage’ credits should be worth more?

Buyers in the voluntary carbon markets are, it seems, obsessed with the latest thing. A substantial discount has emerged between carbon credits issued in recent years, and older vintages. While this discount has its roots in the rules of some compliance markets, and historical questions about environmental integrity, it is increasingly anachronistic, especially in the case of forestry projects. Crucially, it potentially misprices the value of credits generated by high-quality natural climate solutions (NCS), such as those that halt deforestation and forest degradation. For savvy buyers however, recognising the intrinsic value of older vintages from these sources represents a significant opportunity.

Among other attributes, such as project type, certifications and calculation methodology, carbon credits are defined by the year in which they delivered their environmental benefit – i.e. the year when they avoided, reduced or captured the metric tonne of carbon dioxide (or equivalent). This is known as the monitoring period and determines their vintage.

There is a fundamental difference between carbon credits generated from, say, a factory and those from a forest. Those from the latter are alive, while the former are dead. Living trees sequester carbon and store it in wood, provide a canopy for biodiversity and often enrich livelihoods for local people growing crops within them, such as cocoa or spices. Carbon credits generated this way, or perhaps through preserving a mangrove, can contribute to a whole ecosystem’s survival and regeneration. And here’s the rub. The older the vintage, the better the results already achieved for carbon sequestration and conservation.

Yet discounted older vintages fail to value this.

“It’s like saying to a fine wine estate that its young wines should be valued better than the old. We all know that good wine takes time to mature, and so it is with credits generated by high-quality natural climate solutions. Just as for the wine market, discounting older vintages will upset and devalue some of the best credits available, especially in terms of outcomes for planet and people,” says Andrew Mitchell, Founder and CEO at Equilibrium Futures. 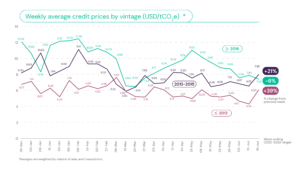 In other words, the value of a carbon credit decreases the longer it takes to be issued and sold after the original monitoring period, meaning older vintages find a far lower price than new credits. The chart above shows the average price of credits vintaged 2012 and earlier trading below newer vintages, in a range of $4.80-$7.20 per tonne, compared with a range of $7.69-$14 per tonne for post-2016 credits. At times, this discount has exceeded 50%.

So why is this happening and what are the consequences?

Out with the old

There are a number of reasons for buyer aversion to older vintages. These include the treatment of vintages in compliance or sectoral systems and related concerns over environmental integrity.

Compliance programmes such as the EU Emissions Trading System (ETS) and the CORSIA programme for international aviation have both imposed restrictions on the use of older vintages and/or older projects. Despite these programmes trading almost exclusively outside of nature-based credits, this has served to enshrine a consensus in the market for NCS credits that vintage is important.

In earlier phases of the EU ETS, the Linking Directive set strict limits on the type and volumes of carbon credits from outside of the cap-and-trade system that emitters could use to help meet their targets. This was primarily due to concerns that large volumes of credits from projects qualifying for the Kyoto Protocol’s Clean Development Mechanism (CDM) and Joint Implementation (JI) programmes could swamp the system and disincentivise European companies from making internal investments to reduce emissions. 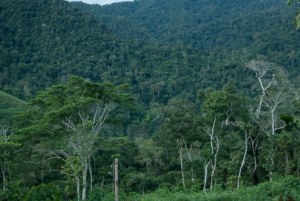 More recently, the international aviation sector’s CORSIA emissions trading system has taken a similar approach. Its eligibility rules, published in 2020, require that any credits from the six eligible offsetting programmes must have been issued from projects that began generating credits after 1 January 2016.

Part of the motivation of such rules is to prevent emissions trading systems becoming flooded by large volumes of credits already in circulation. A related concern is that some of those credits may have been issued by projects with questionable environmental credentials. In the CDM in particular, there were legitimate concerns that the mechanism created a perverse incentive to produce unneeded industrial gases solely to generate carbon credits on their removal.

These concerns and buyer preferences are now being reflected in new products offered by carbon trading markets.

For example, the Nature-Based Global Emissions Offset (N-GEO) futures contract, recently launched by the Chicago Mercantile Exchange (CME), allows buyers and sellers to trade high-quality nature-based offsets. It references vintages from 2016, with a rolling five-year vintage structure, whereby each year the oldest vintage will be removed, and therefore no longer tradable on the N-GEO contract. This is intended to create a guarantee of quality, and further entrenches a market view that older credits have less value. Some corporate buyers even have internal policies that mirror this.

However, the impact is to render many mature, high-quality and nature-based credits, and the projects they support, virtually untradeable. This is bad for nature-based emissions reduction, the co-benefits they generate, and the future of the entire natural climate solutions market.

Recent product innovations in the market have looked to remove vintage tags on credits to improve homogeneity. The GER contract created by Net Zero Markets trades carbon credits undistinguished by vintage. Another platform – OPIS – has proposed the creation of a new expanding ‘retro’ product that baskets vintages 2012 to 2015 as a means to track price disparities between older and newer vintages.

Making a case for maturity

We would argue that concerns of a flooded market and questionable environmental credentials are misplaced when it comes to older vintages in the current voluntary market for nature-based offsets. In pure supply and demand terms, at present there is currently significantly more demand – from companies with net-zero targets, for example – than there is supply. Standards of environmental integrity are higher than they have ever been: considerable scrutiny and experience mean that methodologies developed by Verra, the Gold Standard, and the Climate, Community and Biodiversity Alliance, among others, offer guarantees of rigour. These have been in place for many years and the best early adopters have delivered high-quality credits from the get go, not just in later years.

There are also often good reasons why project developers may elect to sell older vintages. For some nature-based projects, verification of emission reductions may take place several years after monitoring has taken place: this can delay the point at which credits can come to market. Other projects may maintain buffers of credits which are held back as insurance against fire or disease; the project protocols can allow some of these to be released into the market as time elapses. Indeed, often the issuance of older vintage credits is a function of a project over-performing, and removing more carbon than anticipated.

Meanwhile, some projects may have, given the preference of buyers or the function of the way investments may have been made and paid back, sold their most recent credits first and still have some stock of older credits that haven’t yet made it to market, for example they could have been used as collateral for financing, especially given the fairly recent growth in the voluntary carbon market. With many projects needing to generate carbon revenues to help support associated social projects or forest product-related business ventures it is imperative they get the full value for their verified emissions reductions to achieve sustainability. Many have also suffered as a result of the Covid pandemic and may need injections of capital to continue operating. In some cases the sale of older vintage credits may be the only option, yet the full value may not be realised in the market.

There are also some instances when older credits may have greater environmental integrity than newer vintages. First, projects that have been operating for a number of years have had longer to prove themselves, commercially and environmentally. Afforestation projects, in particular, tend to be at greater risk of failure in earlier years. Older vintage credits within a conservation project have also had a greater impact on biodiversity, delivering action at a critical time to ensure the stability of the ecosystem.

The above notwithstanding, buyers need to conduct due diligence on carbon credit purchases. Buyers need to confirm that projects are continuing to operate and deliver benefits for ecosystems and communities, to ensure benefits are verified and that carbon emissions avoided or sequestered remain so. But there is no reason that credits issued by a project in 2012, say, should be any less valuable, from either an environmental or commercial point of view, than credits issued in 2020. In fact, it is possible that the reverse is true, and like vintage wine, if it has been properly curated and looked after, it will generate more collective value as time goes on.

Natural climate solutions projects, such as those that work to protect the Amazon rainforest, generally only have a limited number of years to earn climate finance from carbon credits to support conservation activities. The fact that mature vintages from these projects are being discounted just doesn’t add up. Vintage price tiers were perhaps understandable in the nascent years of carbon markets, but the current depreciation of older vintages denies critical climate finance to high-quality, high-impact projects in the conservation sector which need to fully utilise all available climate finance in order to fund activities beyond the short amount of time they can earn carbon credits.

Bringing clean water to the community of Pueblo Neuvo
April 29, 2022