Emilio Pitan became the national representative of Guatemala’s indigenous Q’eqchi’ people in 2020—the same year that consecutive November hurricanes destroyed many Q’eqchi’ farms on the country’s Caribbean coast. Pitan had spent decades helping Q’eqchi’ farmers obtain legal titles for their land, yet now the weather was becoming too extreme and unpredictable for agriculture. Many of Pitan’s constituents instead decided they would rather make the long and dangerous journey to the United States.

The legal and property rights of the Q’eqchi’ people are now becoming important tools in the global fight against climate change. Using revenues from carbon credits, the Guatemalan Conservation Coast Project has succeeded in protecting almost 60,000 hectares of forest spanning the country’s entire Caribbean seaboard. It has done so, in part, by providing legal assistance to help the Q’eqchi’ obtain land titles, so that small property owners can receive forestry incentives from the Guatemalan government and benefit from protecting forests that store carbon. 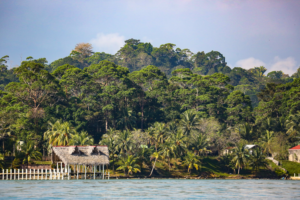 “We’re not a forest in the middle of nowhere,” says Marco Cerezo, the CEO of FUNDAECO, the nonprofit that implements the Conservation Coast. “It’s a very fragmented forest with lots of people. We have to get them involved and create direct benefits to communities from conservation itself.”

Cerezo was one of five founders of FUNDAECO in 1990, not long after Guatemala became a democracy. The new government was too poor to create and manage large protected areas, so it enlisted nonprofits to help. FUNDAECO wanted to protect Caribbean forests that were an important avian migratory corridor and as well as a habitat for jaguars, howler monkeys and more than 500 species of bird.

Cattle ranchers and palm-oil plantations were snatching up the most valuable land in the region and pushing small farmers into forested areas. The Caribbean coast of Guatemala has experienced one of the fastest deforestation rates in the world.

As FUNDAECO’s responsibilities grew, so did the challenge of funding its conservation activities. “We went from trying to save a patch of forest to trying to save a bigger patch of forest to a large protected area to a network of protected areas across Caribbean Guatemala,” Cerezo says. “Eventually we realized that our model of working through grants and donations was not going to be sustainable or powerful enough to achieve conservation at a large regional scale.”

Carbon credits became available as a new source of revenue in 2013 through the United Nation’s framework for Reducing Emissions from Deforestation and Forest Degradation in Developing Countries (REDD+). “With the funds from the sale of these carbon credits, we can finance our whole operation on the Conservation Coast,” Cerezo says. FUNDAECO’s annual budget has tripled from carbon credits, and the Conservation Coast has cut the deforestation rate in the project area in half. It has used the funds from carbon credits to systematise its legal assistance to small farmers seeking land titles; expand its network of women’s health and family-planning clinics; create new scholarship and educational programs; implement biological monitoring in the forests; and support a variety of local agricultural and ecotourism businesses.

The Conservation Coast has become a coalition of different stakeholders in the region, including the government, businesses, nonprofits and communities. “We have over 1,000 property owners that own approximately 700 forest parcels that came together in a collaborative effort to create the largest group project in the world,” Cerezo says. As the value of carbon credits rises, so will the Conservation Coast’s ability to protect forests by improving the livelihoods of local residents. It will use new revenues from carbon credits to make direct payments to communities to protect forest. Cerezo believes the Conservation Coast is finally making real the FUNDAECO founders’ original vision: “a model that simultaneously tackles the challenge of conservation and the challenge of rural poverty,” he says.

Pitan can already see the difference that forestry incentives are making in Q’eqchi’ communities. Villages that depend on ecotourism lost all their customers during the Covid-19 pandemic, and forestry incentives have helped them stay afloat. Other villages have used forestry incentives to build solar panels, pay for medical care for elderly residents, and send their children to better schools. “Since REDD+, we have the commitment of these forest owners,” Pitan says. “There is more money and more resources to cover the needs of the community.”

This piece was originally posted on the WBCSD website to launch the Conservation Coast as an NCS lighthouse project.